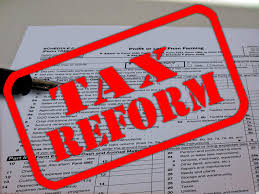 Last week, Congress and the President delivered what many view as a Christmas present before leaving town for vacation; the most sweeping tax reform legislation since the Reagan years. The Tax Cut and Jobs Act makes numerous changes to both individual and business tax rates, and restaurants and retail trade groups have hailed the new legislation, saying it will help businesses in their industries.

Not everyone is a fan of the new tax reform bill, however. Democrat politicians and their allies call the bill a huge tax break to the wealthy on the backs of everyone else. The reality is that the tax reform bill lowers taxes on almost everyone, though it is true that corporations are the largest beneficiaries.

So how will tax reform impact franchise businesses? Thus far, there is not a clear answer to this question. This is a complicated piece of legislation, and there are a lot of moving parts. For this reason, it will take several months before we know the full impact it will have on the franchising industry.

Here is a list of some of the major highlights of the tax reform legislation, and what these changes might mean to small businesses:

Reduction in the Corporate Tax Rate

C Corporations are the biggest winners in the tax reform bill. The legislation lowers the corporate tax rate from 35% to 21%, making the U.S. corporate rate competitive with most other countries. This rate cut is permanent, giving corporations a predictable tax environment for the foreseeable future. With the corporate rate now lower than tax rates for other types of business entities, you may see more franchises opting to form C Corporations, rather than Limited Liability Companies (LLCs), S Corporations, or partnerships.

Tax Cuts for “Pass Through” Entities

Currently, about 95% of all American businesses, including most franchises, are “Pass Through” entities in which the income of the entity passes through directly to the owners and is taxed at their individual rate. Examples include the entities mentioned above such as Limited Liability Companies (LLCs), S Corporations, partnerships, and sole proprietorships. Though they did not get as big a break as C Corporations, “Pass Through” entities were not left out. These types of entities will have their tax bill lowered by 20%.

One area of the tax reform bill that directly affects many franchise owners is the ability to expense up to $1 million annually for qualified equipment, up from $500,000, with the phaseout threshold raised from $2 million to $2.5 million. Bonus depreciation is also raised from 50% to 100%, meaning businesses are now able to deduct 100% of the cost of eligible property the year it is placed into service, rather than depreciate it over a period of years. These changes provide incentives for franchisees to upgrade more of their equipment during a time when it is increasingly important to automate their systems.

Perhaps the most significant potential benefit for franchisees and other business owners provided by tax reform is its impact on the overall economy. In the second and third quarters of 2017, the U.S. economy experienced two consecutive quarters of economic growth in excess of 3% of GDP. This was the first time this occurred since 2014. This level of growth has already created hundreds of thousands of new jobs, providing more disposable income for consumers. If tax reform goes as planned, growth could exceed 4% or even 5% of GDP in 2018 and in subsequent years. If this occurs, franchisees across the board will be boosted, and we could see thousands of new entrepreneurs taking advantage of the favorable conditions and getting into the franchise game.